Build Your Brand with Chris Well

Get attention. Get interviewed. Get known.

How to Write a Press Release: 8 Tips for Authors Whether you have a publisher or you’re on your own, most of the time the burden of creating an effective press release–or, better yet, a series of press releases–falls on the author. (If you’re looking for a traditional deal and want the publisher to handle it–I can tell you from experience, it’s not likely to work out for you.)

You’re already writing your stories. Or your thought-leadership articles. Or your column. And now you have to start writing press releases?

It can be hard for writers to switch from one part of their to the slightly different part of the brain that makes news releases. In fact, you may be wondering how to even get started. We’re here to help. Let’s start at the top:

WHAT IS A PRESS RELEASE?

In the past, a company or organization would create this sheet of paper that went out to all the news outlets: Newspapers, magazines, radio, television, what have you. These press releases included announcements that were then disseminated to the corporate media–sometimes to industry insiders, other times to the general public. In those days, the creator of the press release needed a great deal of resources, and had very limited access to the end consumer.

Of course, the Internet changed all that. The explosion of digital media–and the everyman access that comes with it–means that now a media release can be created and distributed cheaply by the private solopreneur (I’m talking to you, author) and then sent right to members of the general public.

From your perspective, the purpose of the media release is get your announcement out into the world and into the hands of the media–including local news, bloggers, websites, anyone else with an audience–and also, potentially, to your target readers.

(David Meerman Scott does an excellent job of explaining this new paradigm for media releases in his book The New Rules of Marketing & PR: How to Use Social Media, Online Video, Mobile Applications, Blogs, News Releases, and Viral Marketing to Reach Buyers Directly.)

Is there a right and wrong way to go about creating and distributing a press release? Yes, and this is why it’s so important to study press releases, including their proper formats and the best ways to get the targeted audience to read and/or view them.

Sign up for my newsletter and get a FREE download of the "Author Publicity Blueprint." This PDF includes a media kit checklist, a book promotion planner, mindmaps, prompts, and even idea starters for your blog. Click HERE to get it!

If a press release isn’t newsworthy, then there’s really no sense in distributing it. After all, why would a person want to read it if it doesn’t prove valuable and interesting to them? When it comes to being either a traditional or self-published author, to create a press release that’s newsworthy, a person will need to think from the viewpoints of the people he or she is trying to reach. Why is it that these people would want to read whatever piece of content it is that’s being promoted in the press release? How will the content bring value to these people’s lives? The answers to these questions will need to be included in a natural way in the press release.

2) Think of the Readers (Members of the Media)

A dry statement of fact is boring–so, you need to craft a story. When professionals write a news story (yes, “story”), they’re trained to work in the essential building blocks: Who, What, Where, When, Why, and How. (Notice how filling in those details turns a list of facts into a narrative?) The editor or journalist or blogger who receives your press release doesn’t care about you, or your product, or what you want out of the exchange. But if you tell an engaging story–don’t just tell about your book or event, tell the story behind your book or event–members of the media are far more likely to pass that story onto their audience.

5) Have a Great Headline

As with any type of content, a press release needs an appealing, attention-grasping, make-you-want-to-read/watch headline. After all, if a person doesn’t find the headline interesting, there’s a good chance that he or she won’t read or watch the press release. Creating good headlines can be a bit of a challenge, however, for authors, bloggers and others in the content industry, it should be fairly simple to come up with one. And although the headline needs to be catchy, it should still at the same time incorporate the theme and purpose of the press release.

It cannot be stressed enough that a press release needs to be brief. No one has the time to sit around for extended periods of time to read through or watch a press release. And quite frankly, there’s no reason for the press release to take that long. It’s pertinent to simply inform the audience of the purpose of the release, explain the meaning behind the purpose, throw in a few lines of closure and then end it.

And just as important as it is to be brief, the person who creates the press release must be explicitly clear in what it is that’s being promoted or stated. At all times, only words that the audience is sure to understand should be used. Never should a press release make the audience feel as if they need to have a dictionary in their hands, or even worse, make them feel dumb.

Press releases should be event-driven, meaning they occur when something particular happens. For example, when a new book has been completed by an author, a press release would then be created and distributed to promote the new book. Or, if a blogger was to create a blog posting that received state-wide recognizance, then this would be worthy of a press release. Event-driven press releases ensure that they are of value and would be thoroughly interesting to the targeted audience. 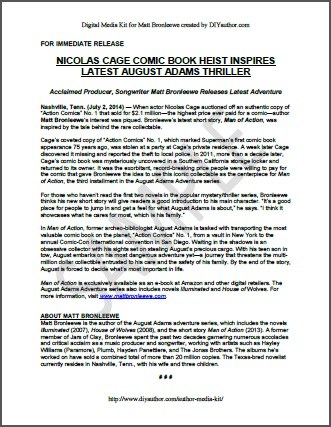 There are many ways that press releases can be formatted; however, the gist of these formats tend to stay the same. It is of the utmost importance that a press release be formatted properly, which can usually be accomplished by using a press release template. Such templates are abundantly available online, and best of all, most of them can be used free of charge. The standard format for a press release is usually as follows:

a) [FOR IMMEDIATE RELEASE:]

HOW MANY PRESS RELEASES ARE NEEDED?

Press releases can take place both before and after an event. For authors, it’s important to do press releases about their new and upcoming books, blog posts, etc. well in advance before they are actually distributed. For example, a book could be promoted via press releases anywhere from six to 12 months before it’s actually available for reading. The momentum that’s created through the press releases can be used to push the sales of the book.

If it turns out to be of extreme interest to readers, then several press releases will be needed to give the content the maximum amount of exposure. Not all blog posts and white papers need to be promoted via press releases. Only the ones that qualify as newsworthy and of great value to the targeted audience should be.

Another instance in which doing a press release is highly advised is when a sequel is in the development to a previous book that was well-liked by readers. The readers will not only appreciate the fact that the author took the time to reveal the creation of a sequel, but it will also serve as a great way to promote the new book. The interests of the readers will build over time while waiting for the new book to be released, which will have readers lining up to buy it on the day it becomes available for purchase.

Authors are great at writing, but many of them fail to be good at creating press releases. Today is the day to change this. Authors, bloggers, freelance writers and anyone in the content creation industry should start educating themselves on press releases.

Chris Well is an expert in media, social media, and email marketing. A media veteran with 30+ years experience working at national media brands, he has been a magazine editor, columnist, journalist, broadcaster, and teacher, with field experience covering music, publishing, human interest, and more. (There was also that time he was the editor of a bridal magazine.) Chris is also an experienced social media manager, and certified in email marketing. As a published novelist, Chris has written suspense and mysteries for traditional publishers and as a self-published author.